3 Ways Inclusions Can Be a Good Thing in a Diamond

Self-proclaimed gem geek and Customer Service manager, Debra Dolphin, sheds some light on one of the scarier elements of diamond buying: navigating the flaws, blemishes, and beauty marks known as inclusions. Read on to learn what she has to say.

Most people think that the diamond characteristics or imperfections known as inclusions should be avoided, but unless the person buying your ring is a big spender who can afford a flawless diamond, they’re a fact of life. And I think you might actually WANT inclusions. Here’s why:

While the type of inclusion is one of five factors used to determine a diamond’s clarity grade, few people realize that these characteristics actually play a much broader role. (The other factors in clarity grading include size, number, position, nature, and color or relief.) For example, a diamond’s unique imperfections can be a great identifier. Similar to snowflakes, no two diamonds are exactly identical, so getting to know key inclusions can help you recognize your diamond. That’s empowering!

Another perk, especially for those of us who are trained gemologists, is that natural diamond inclusions differ from those in imitations or lab grown stones, and can provide conclusive proof of natural origin. 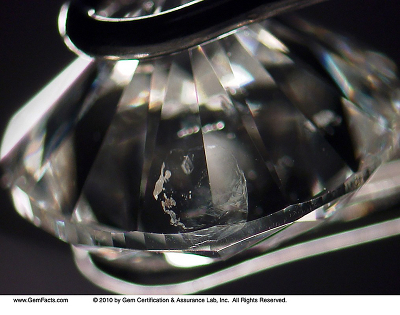 An example of a knot inclusion.

Additionally, becoming familiar with the most common diamond inclusions can assist you in understanding your diamond grading report.

Here’s a rundown of the most commonly found diamond inclusions and what to know about each.

A pinpoint is a minuscule mineral crystal (sometimes even a diamond crystal within the diamond), as small as a speck of dust that often hides from the trained eye, even under magnification. In clusters, they’re known as a group of pinpoints. When those clusters are so small that they’re only seen as a slightly hazy form, then they’re called a cloud, which look much like the ones in the sky that form as water particles gather.

A crystal is a diamond or other mineral in its natural, raw crystal form that is embedded within a stone. A dark crystal has a medium or dark tone. It’s also a movie from 1982, but that’s another story. A needle is a long, narrow, rod-shaped crystal, while a knot is a crystal that reaches the diamond’s outer most surface area, similar to a knot in wood grain. On rare occasions, these crystals can be especially beautiful when they take on forms such as a heart shape, a bumblebee, or dolphin. They are often colorless or various shades of white, but can be any color—red, green, gray, or black. Just think of them as an extra gemstone within your diamond at no additional cost. 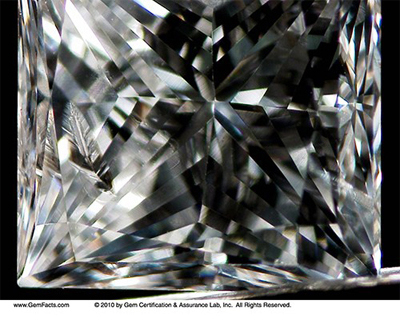 Much like a geological chasm but under a microscopic scope, a feather or cleavage is a void or separated plane within the diamond’s internal structure. Larger feathers in SI clarity graded diamonds may be eye-visible and often I2 and I3 clarity diamonds have large feathers that can create structural integrity concerns, which is one of the reasons Blue Nile does not carry those clarity grades. Higher clarity stones (VS and above) may still have feathers, but are not as much of a concern. Learn more about clarity and the other 4Cs here.

Grain lines, or group of grain lines are subtle, usually colorless, and caused by irregular growth patterns during the diamond’s formation. A twinning wisp is a series or string of small pinpoints, clouds, or crystals produced by an irregularity in the crystal structure. Both are permanent snapshots of Mother Nature’s disruption at a single-point in time thousands of years ago. 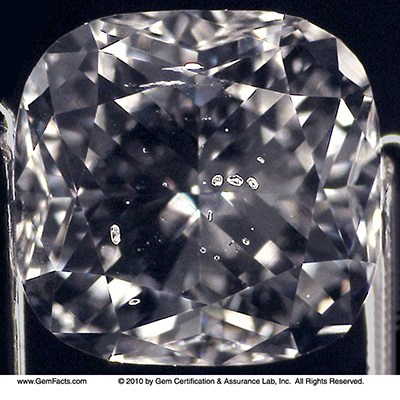 An example of crystal inclusions.

An indentation in the diamond—along with a piece of the original diamond’s unpolished outer skin—intentionally left on the diamond’s surface, typically around the girdle area.

A small, slightly deep concave area typically caused when a crystal near the surface is inadvertently removed during the diamond cutting and polishing process.

Often small and shallow, chips or nicks are irregular openings typically located on the girdle edge. 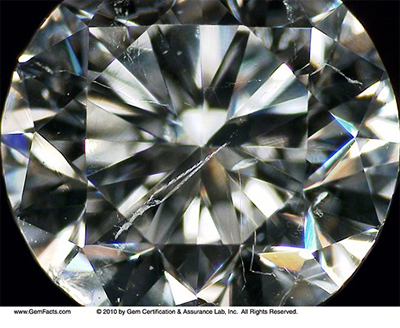 So, there’s a brief look at inclusions. Keep in mind that any diamond graded VS or higher is likely to be eye clean, and that the clarity-impacting inclusions on all the diamonds we sell are clearly disclosed on an unbiased grading certificate from the Gemological Institute of America (GIA). If you ever have any questions or concerns about the diamond you’re considering, don’t hesitate to connect with our diamond and jewelry experts, who are available 24/7 to answer your questions. 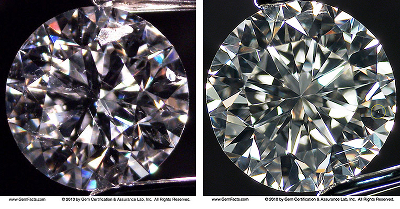 A diamond graded I1 with multiple inclusions versus a Vs1-graded diamond. The small feather inclusion on the right of the stone is the only grade-setting inclusion.

How to Determine the Perfect Ring Size
Ask an Expert: What Does a Gemologist Do?