Does love at first sight really exist? If you have any doubts, look no further than this magical couple in our new feature Love + Stories. And if the significance of a chance encounter, a red dress, and a little bit of friendly subterfuge intrigue you, go behind the scenes of our fall photo shoot and get the scoop on this real-life fairytale. 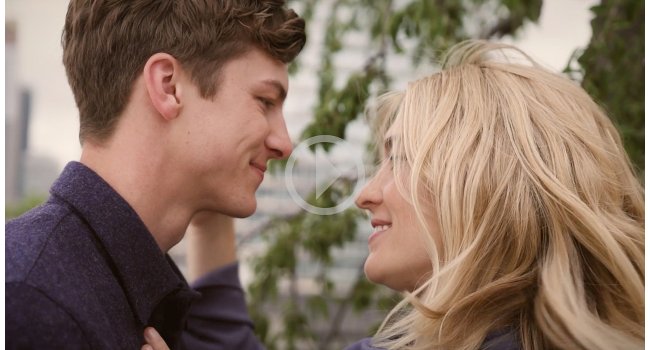 Jackie is a New York City lawyer who also owns her own company. Ben is a model and graduate student from a small town in Norfolk, England. Though an initial attraction connected them, their complementary wavelengths sustain the relationship. Vastly different schedules (and time zones) are nothing compared to Ben and Jackie’s ability to recognize a good thing and hold on tight. See how this couple went from festival fling to real thing.

The music festival scene is booming. Each year, millions of fans flock to these mega events so it might seem unlikely that you’d find a real connection amongst those massive crowds. Luckily for Ben and Jackie, who met at the Panorama Music Festival, a mutual friend helped out. Jackie cracks a wry smile and says, “it was really cute… but a bit of a setup.” Ben beams, a dimple twisting into his cheek, as he recalls the moment he first saw Jackie in her “red dress and silver Nike sneakers.”

The two enjoyed the performances almost as much as each other’s company over the course of the three-day festival. At the last moment, Ben made a move and surprised Jackie with a kiss. The festival ended but their relationship lived on.

P.S. Jackie has plans to wear the same outfit as the day they met (and maybe this Braid Halo Solitaire Engagement Ring) to the Panorama Music Festival with Ben this year.

When we asked Ben how Jackie would describe him, he answered without hesitation, “She'll probably say, "Bouncy Ben.” And he’s not wrong. “I think Ben is more generally bubbly and positive and happy, and I see both sides.” Jackie tilts her head reflectively, “I see the more cynical, New York side sometimes. It's good, because he uplifts me, and he's always supportive.” Ben, on the other hand, loves Jackie’s easy-going egality. “She gets on with everyone so well. She doesn't treat anyone differently.”

With over a year spent together, Ben and Jackie have been casually entertaining the idea of getting engaged in the most swoon-worthy way. “I think we talked about marriage and that kind of thing in the future. But also it's fun to do something like this [Blue Nile photo shoot] together, and it's kind of romantic, too,” Jackie says.

Ben says, “When this opportunity came up, we got to looking at the [Blue Nile] website, and looking at rings. Later, Jackie was sending me all these engagement ring pictures and was like: remember these words: vintage, diamond, emerald cut.”

Now that Ben is clued in on Jackie’s ideal engagement ring, he acknowledges that a proposal plan is on his mind. “I definitely think there'll be a surprise down the road. When it does happen, I'm hoping it will be a surprise. Hoping… We'll see.”

WHAT DOES LOVE MEAN TO YOU?

“The first time we both said that we love each other was, I think it was Halloween. We both kind of announced it at that same time, that we're falling in love. Like this is something real. As much as other people may have been able to tell what it was, I think that's the first time we both said something to each other about it,” Ben recalls. “I guess I see love as two people who go through the thick and thin. They can see past all the other rubbish that's put in front of people. Whether it be money or health or everything like that. I guess being able to see past that and still being able to see so much true color.”

“I think it's obviously a feeling and a chemistry between two people. I think it's also about day to day, does it work, and can you guys keep this going,” Jackie finishes with a smile.

Clearly, these two are on the same page.

See more of Ben and Jackie in our campaign photos this season. We look forward to introducing more real-life couples in the coming weeks. Looking for inspiration for your own love story? Let us know how we can help.