Is red your favourite colour? July's birthstone gem is the ruby

The July birthstone is the incomparable ruby, cherished over centuries as a symbol for passion, power, courage and protection. The ruby's deep colour is tied with love, raw emotion and wisdom. Often associated with wealth and prosperity, they're a favourite for crowns and other royal jewellery, as well as modern celeb royalty, most notably by such fabulously-dressed gals as Penelope Cruz, Naomi Watts, Scarlett Johansson, Taylor Swift, Emily Blunt, and of course, Elizabeth Taylor.

If you're shopping for a beautiful birthday gift or memorable jewellery, the ruby's lustre and cachet is extraordinary. Learn more about the exceptional ruby birthstone gifts carried by Blue Nile and be inspired! 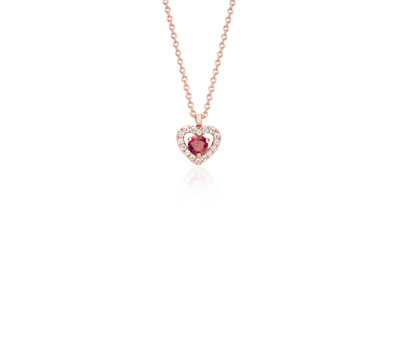 Did you know that rubies and sapphires are made of the same mineral? They are. They're both made of the mineral corundum, but the desirable and distinctive red colour come from trace amounts of chromium. Chromium incidentally cause cracks and fissures inside the crystal—these imperfections, called "silk" are in nearly all rubies, and are used to distinguish genuine rubies from lab-created ones. Rubies without imperfections are exceptional and can command prices higher than diamonds of comparable quality.

Rubies mostly form in marble or basalt, and the most-prized for many centuries came from Myanmar, which yielded the famous "pigeon's blood," vibrantly red rubies that have been used in spectacular jewellery. Other sources of rubies include India, Sri Lanka, Thailand, Africa, Kenya and Tanzania. 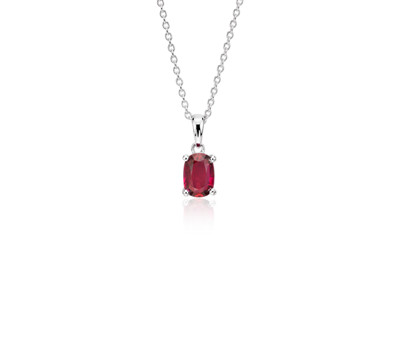 Rubies run the colour gamut from orange-red to purple, but the most valuable are a vibrant red with a slight, violet hue. These blood-red rubies are known as "pigeon's blood," and they are exceptionally brilliant, transparent and intense, with a blue-tinged fiery red.

All these colours have strong emotional and cultural associations, and when they're connected with a rare gemstone, the ruby is an object that elicits a great desire!

Rubies rate 9 on the Mohs scale, edged out of the top spot by diamonds only, which means that they are exceptionally wear-resistant in jewellery and perfect also for practical use in such items as surgical instruments and mechanical watches. The ruby's fluorescent effect (from its inclusions) is what made it a viable choice to be used in the first working laser, created in 1960 by Theodor Maiman. 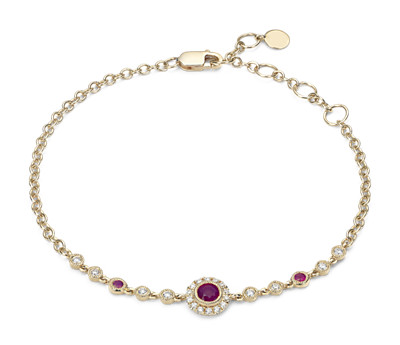 Ruby and Diamond Vintage Inspired Bracelet
Not Available In France

The most expensive ruby and the most expensive coloured gemstone ever sold was the Sunrise Ruby, a pigeon-blood at 25.59 carats, flanked by diamonds and set into a Cartier ring, which was purchased by an anonymous bidder in 2015 for $30 million. It was originally mined in Myanmar, and its named for a poem of the same name written by Rumi, the 13th-century Sufi poet.

Famous lover of rubies, Elizabeth Taylor, had quite a collection upon her death, and when her jewellery was auctioned at Christie's in 2011, her 8.24 carat ruby sold for $4.2 million!

Now that we've ignited your passion for rubies, express yourself and discover your favourite at Blue Nile. Whether you believe in its mystical powers or you can't get enough of its mesmerizing, crimson glow, the powerful magic of the ruby is truly compelling.

From the Sea to the Moon: Beautiful Birthstones of June
How to Layer Necklaces: 7 Tips for Mastering the Look