The traditional solitaire consists of a ring head with four or six prongs that holds a center diamond and that’s it—no other stones along the band (or shank as it’s called in the biz). A four-prong solitaire allows more light to circulate around the stone compared to a six-prong, which tends to be a little more secure, given the two extra prongs. A small diamond can look smaller when set in a six-prong, but the true difference between a four-and six-prong is marginal—don’t let it slow you down. 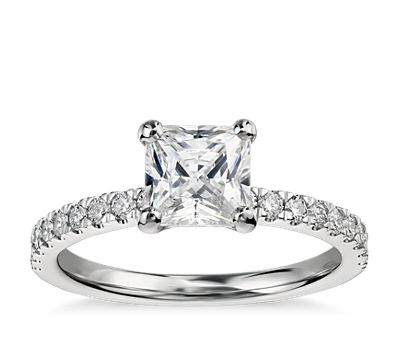 Similar to solitaires are sidestone rings, where the main center stone is flanked by a trail of tiny pavé diamonds that go part way or entirely around the shank. This is also a very popular—and safe—style to go with when you’re unsure or overwhelmed by the choices.