August's primary birthstone is peridot, a light lime to deep olive green gemstone that symbolizes good fortune. Peridot is born out of olivine, a common mineral sourced from volcanoes. All peridot comes from either deep in the earth's mantle or from pallasite meteorites. While peridot from meteorites is very rare, peridot from underground is plentiful, even on American soil—namely in Arizona's San Carlos Reservation, which supplies an estimated 80-95% of the world's peridot. 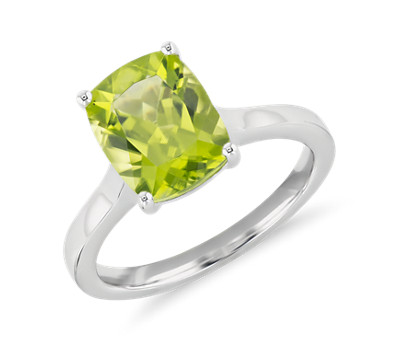 Outside of the United States, peridot is sourced from China, Pakistan, Myanmar and Brazil. The stone has also been found in Australia, Mexico, Norway, Kenya and Sri Lanka. Peridot's vivid colour is ideal for fine gemstone jewellery, and makes a perfect gift choice. Read on to learn more about the history, meaning and characteristics of peridot, and get gift ideas for the loved ones in your life who are celebrating an August birthday.

Peridot has a fascinating, mythological history, and ancient records show that peridot has been mined as early as 1500 B.C. Peridot may originate from the Greek word peridona, which means "giving plenty." In ancient Hawaiian times, peridot crystals were thought to be the tears of Pele, the volcano goddess. Ancient Greeks and Romans used peridot in their rings, pendants and other jewellery, believing it bestowed nobility.

In the 4th century B.C., ancient naturalist Pliny the Elder discovered peridot on a small, coastal Egyptian island in the Red Sea. He dubbed the stone "topazos" and gave the island the same name. That island was later called St. John's Island, or Zabargad, which was mined up until WWII.

Ancient Egyptian myth tells us that if you wear the peridot gemstone, it has the power to ward off nightmares and other forms of evil. Egyptians in that era called it the "gem of the sun" and believed it could instill confidence and power. They also believed that the stone was its most powerful when set in gold.

Peridot has a history of being confused with emerald, and many historians claim that Cleopatra's famed emerald collection actually included peridot gems.

Thanks to these magical myths, peridot has come to symbolize strength, opportunity, peace and prosperity, making August babies quite lucky and in good, protective company.

Many gemstones get their range of colours from trace impurities and outside elements, but not peridot. Its vibrant, light green colour comes from the iron found in olivine. These subtle shades stroll between yellow-green and brownish-green, depending on the amount of iron. No reds, blues, or other primary colours here!

Peridot, sometimes referred to as the "evening emerald," comes in at around 6.5 to 7 on the Mohs hardness scale and is quite durable in its finished form, making it a very wearable, everyday jewellery option. Of course, this doesn't mean it won't scratch if you aren't careful. To clean your peridot jewellery, opt for mild soap and warm water.

If you're looking for a gift for a green-loving Leo (Aug. 1st-22nd) or Virgo (Aug. 23rd-31st) in your life, peridot gemstone jewellery is the perfect choice and comes in at more affordable prices than emeralds. If peridot is good enough for Catherine, Duchess of Cambridge, it's good enough for us! 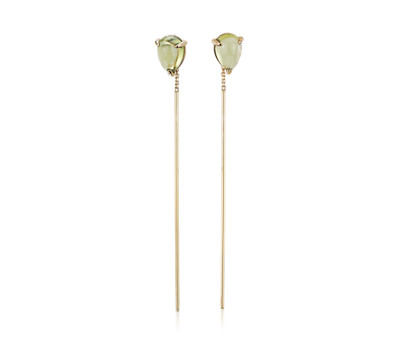 Peridot's value is measured using the usual 4Cs of gem quality, especially colour. The highest quality peridots are a pure green colour, absent of any brown or yellow. Smaller stone sizes are the most affordable, with flawless 5+ carat peridots being the rarest and most expensive. It's said that the Smithsonian harbors a whopping 310 carat peridot. Lucky for us, there's plenty of peridot birthstone supply to fit any style and price range.

If you want to honour the stone's mythological heritage, consider a peridot piece of fine jewellery set in gold for extra healing power, such as our Pear-Shaped Peridot Earrings in 14k Yellow Gold. Or, choose a sterling silver piece to highlight this August birthstone's olive brilliance, as in our stunning Peridot Rope Pendant.

And finally, happy birthday to all the August babies out there! Go forth and prosper with peridot, one of our favourite gemstones!

The Royal Red Ruby: Regal Birthstone of July
From the Sea to the Moon: Beautiful Birthstones of June